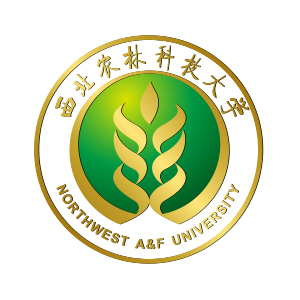 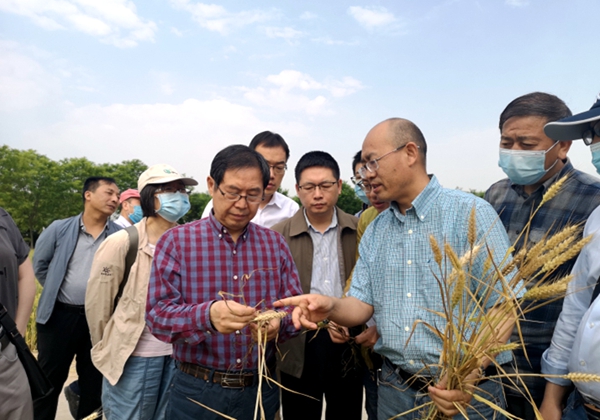 Kang Zhensheng (front left), Hu Xiaoping (front right) and other researchers from Northwest A&F University in Shaanxi Province in northwest China inspect grains for stripe rust and scab in a wheat field in the province on May 19, 2020(COURTESY PHOTO)

In a flowerpot at Kang Zhensheng's laboratory grows a cluster of wheat, a crop to which the agricultural scientist at Northwest A&F University has dedicated decades of work.

In the university, located in Yangling, Shaanxi Province in northwest China, Kang has been leading a group researching wheat diseases such as stripe rust and scab, two major infections that may reduce yield by one third or even more.

Last year, when COVID-19 ravaged the human world, stripe rust pathogen also posed a danger unseen in a decade to wheat, a major grain crop in China. But thanks to disease control solutions developed by Kang and others, the harvest was still bountiful.

This year is expected to see a 17.5-percent year-on-year increase in major crop diseases and pests in China, according to a forecast by the National Agro-Tech Extension and Service Center, an organization affiliated with the Ministry of Agriculture and Rural Affairs (MARA). Experts have predicted that more than 70 percent of wheat, rice, corn and potato production areas will be at risk.

MARA issued a response plan on January 29 to ensure a good harvest this year. It set a target of mitigating the total damage caused by major diseases and pests to rice, wheat, corn and potato production to below 5 percent of the expected output. Moreover, it pushed for accelerated spread of green products and technology and continued reduction in pesticide use.

Agricultural experts were busy even before spring arrived. In February, MARA sent six work groups to major winter wheat-producing provinces to survey the growth of seedlings and soil moisture and monitor disease and pest prevention and control programs.

On March 7, Kang presided over a seminar in Zhengzhou, capital of Henan, a major wheat producer in central China. He urged researchers to go to the fields to study crop diseases and pests and come up with effective and feasible solutions. That is what he has been doing in the past decades, focusing mainly on stripe rust.

Scientists have been breeding varieties resistant to stripe rust, but earlier on, they were perplexed by a problem. The disease-resistant varieties, often taking eight to 10 years to cultivate, lost resistance after only three to five years.

Kang's team discovered how the stripe rust pathogen mutated and spread, and developed prevention and control strategies accordingly. For the achievements, Kang has won various science and technology awards and was elected an academician of the Chinese Academy of Engineering.

Stripe rust, which cannot survive high temperature, is mainly prevalent on the mountains above 1,500 meters in northwest China in summer. In fall and winter, it is blown eastward and in spring spreads to major wheat production areas in eastern and central parts of the country, with the potential to trigger an outbreak. Since it is a cross-regional airborne disease, there needs to be coordinated control nationwide to prevent it.

Kang's team found genetic mutations occur when the pathogen reproduces in summer on barberry, a bush that serves as an alternate host for it. New variants born in the northwestern provinces are then carried eastward by the wind, making previously disease-resisting varieties susceptible.

The team also found warm winters and spring rainfalls help the development of stripe rust. They have developed forecast systems for wheat diseases based on analysis of the amount of pathogen at source, the system of planting, crop structure, climate and other factors, and designed epidemic response practices, which have effectively reduced loss.

Many other agricultural researchers have also done a lot of work in preventing and controlling scab, also known as Fusarium head blight or wheat cancer.

Every year, the devastating disease can affect one sixth of the total wheat-sowing area in China, said Kong Lingrang, a professor at the Shandong Agricultural University in east China. In average years, it can reduce the yield of infected fields by 20-30 percent, and in serious cases, by 50 percent, or even 100 percent.

In addition, the pathogen secretes toxins including vomitoxin, a carcinogen harmful to both humans and livestock. If 1 kg of wheat has a vomitoxin level above 1 milligram, it becomes unfit for human consumption. This means in every 100 grains, there should be no more than 4 infected grains.

Kong's team has made a breakthrough in breeding wheat varieties resistant to scab. About two decades ago, they noticed that a grass was resistant to scab. However, pinpointing the scab-resistant gene from the more than 100,000 genes of the grass was like finding a needle in a haystack. Still, the team plodded on and it took them about 20 years to identify the gene and figure out a way to introduce it into wheat.

Finally, they successfully transferred the resistant gene, named Fhb7, into wheat varieties. This work is regarded as one of the top 10 science and technology achievements in 2020.

Wheat carrying the gene has been found to be more resistant to scab. Data shows that when scab infection in regular wheat varieties was 60 percent, in varieties with the Fhb7 gene it was only about 20 percent, Kong said in late January. The gene also induces resistance to crown rot, another wheat disease.

Kong added that the gene has been transferred into over 20 main varieties grown in major wheat-producing areas. The scab-resistant varieties can greatly reduce the damage caused by disease as well as pesticide use and production costs.

Xi'an Huang Bioengineering Co. Ltd., in partnership with Hu Xiaoping, a professor at Northwest A&F University, has developed automatic real-time monitoring and early warning devices for crop diseases and pests. The company in Xi'an, Shaanxi, mainly engages in biological hi-tech research and development as well as the promotion of agricultural hi-tech products.

Huang Weili, an executive with the company, said the solar-powered devices can predict crop diseases and pests with the mathematical models developed by Hu on the basis of historical data. Every May, agro-technicians from the company and postgraduate students from the university conduct field survey to verify and improve the forecast models.

"The equipment can detect scab infection 15 days ahead of the naked eye," he told Beijing Review, stressing that spraying fungicides when the infection is visible to the naked eye is too late to control the disease.

Sensors collect data including temperature, precipitation, moisture on leaf surface and the initial amount of pathogens, then the data is transmitted to cellphones and computers via the Internet of Things. Upon receiving the alert sent by the devices, farmers will start spraying fungicides.

In many cases, drones and self-propelled plant protection machinery do the spraying. In addition to plant protection, such equipment has also been employed to sanitize public areas against COVID-19, according to the National Agricultural Science and Technology Innovation Alliance.